Joe’s Brewery, founded in 1991, is a much-loved family-owned bar, popular among students, visitors and Champaign-Urbana residents. The company has 135 employees—cooks, servers, bartenders and security—most of which are University of Illinois students. The business is located at 706 S. 5th St. in Champaign.

Joe’s is a Champion level sponsor of Crisis Nursery in Urbana!

General manager, Luke Henry, said Joe’s supports Crisis Nursery because the services are a vital part of the C-U community— especially in such a critical time during the COVID-19 pandemic.

Joe’s Brewery has been supporting the Nursery for nearly a decade through general giving, sponsorships, third-party fundraisers and more. The business has been a consistent supporter of the Nursery’s Dinner & Auction since 2013.

Luke said he’s familiar with the Nursery and has toured our facility on Hill Street in Urbana. He said they know people on all ends of the Nursery—people who have been employed, supporters of the organization and people who have benefited from what we offer to community kiddos and families.

About 10 years ago, Joe’s purchased and donated Christmas gifts to local children. Luke said between Thanksgiving break and Christmas break, employees who chose to do so would donate a dollar or two at the end of each shift to put toward purchasing the gifts.

“Like myself, much of our staff looked back at our Christmas mornings with memories of opening a Nintendo or getting a new pair of Air Jordans,” Luke said.  “If we are able to make a memory for just one kid that they would remember 30 years later when they were writing an email, that's just a great thing to be able to do for someone.”

In addition to supporting Crisis Nursery, Joe’s hosts many events at the bar to benefit various causes. The local fraternity and sororities, and even our competition on campus, really make significant philanthropic efforts.  Luke said he hopes the act of giving back to the community is instilled in his staff and the students on campus.

“It's a great comfort to know in this crazy world that there really is a sense from many people to help their neighbors and fellow men and women,” Luke said.

He and the rest of the Joe’s team hope everyone is staying safe and wish the auction much success! 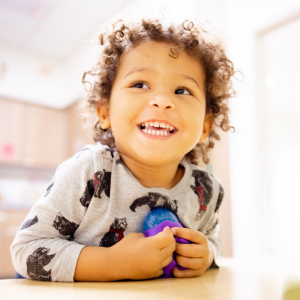 This holiday season, you can’t buy joy, but you can give it!
This #GivingTuesday you can double your impact, all thanks to Jeffrey and Lauren Brokish. 💙